While it is possible to write a playbook in one file as we’ve done throughout this workshop, eventually you’ll want to reuse files and start to organize things.

The "role" feature in Ansible is the way we do this. When you create a role, you deconstruct your playbook into parts and those parts sit in a directory structure. "Wha?? You mean that seemingly useless best practice you mentioned in exercise 1.2?". Yep, that one.

For this exercise, you are going to take the playbook you just wrote and refactor it into a role. In addition, you’ll learn to use Ansible Galaxy.

Let’s begin with seeing how your apache-basic-playbook will break down into a role.

Fortunately, you don’t have to create all of these directories and files by hand. That’s where Ansible Galaxy comes in.

Ansible Galaxy is a free site for finding, downloading, and sharing roles. It’s also pretty handy for creating them which is what we are about to do here.

Step 1: Navigate to your project

Navigate to your apache-basic-playbook project.

Create a directory called roles and cd into it.

Use the ansible-galaxy command to initialize a new role called apache-simple.

Take a look around the structure you just created. It should look a lot like Figure 1 above. However, we need to complete one more step before moving onto section 2. It is Ansible best practice to clean out role directories and files you won’t be using. For this role, we won’t be using anything from files, tests.

Remove the files and tests directories

In this section, we will separate out the major parts of your playbook including vars:, tasks:, template:, and handlers:.

Make a backup copy of site.yml, then create a new site.yml.

Add the play definition and the invocation of a single role.

Add some default variables to your role in roles/apache-simple/defaults/main.yml.

Add some role-specific variables to your role in roles/apache-simple/vars/main.yml.

Create your role handler in roles/apache-simple/handlers/main.yml.

Add tasks to your role in roles/apache-simple/tasks/main.yml.

Download a couple of templates into roles/apache-simple/templates/. And right after that, let’s clean up from exercise 2.1 by removing the old templates directory.

Now that you’ve successfully separated your original playbook into a role, let’s run it and see how it works.

If successful, your standard output should look similar to the figure below. 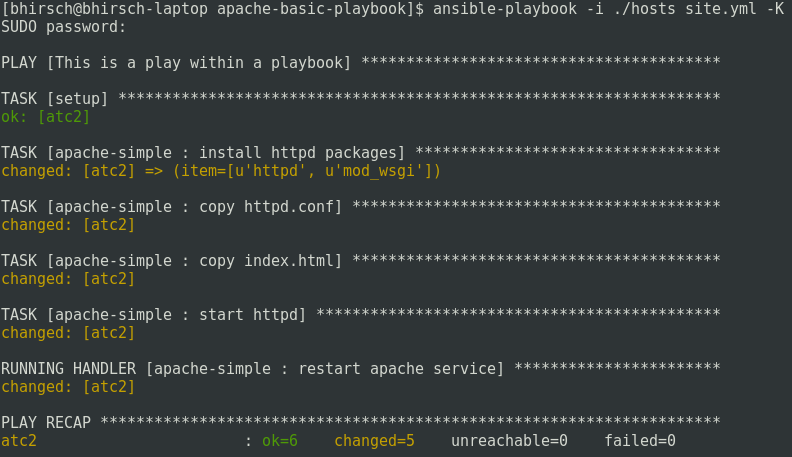 You should now have a completed playbook, site.yml with a single role called apache-simple. The advantage of structuring your playbook into roles is that you can now add new roles to the playbook using Ansible Galaxy or simply writing your own. In addition, roles simplify changes to variables, tasks, templates, etc.